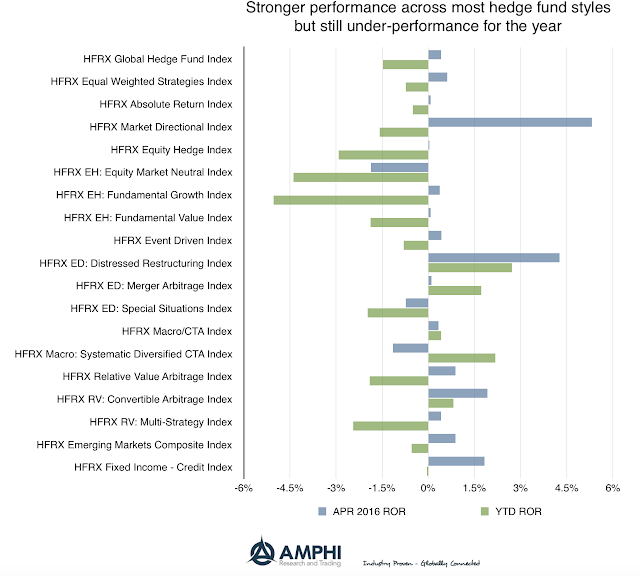 Hedge fund performance across all styles generally showed positive performance as measured by the HFR indices. It should be noted that there has been significant divergences between index numbers this month in some styles, but the general story of good performance holds. Nonetheless, the year to date return numbers are still negative even with both stock and bond indices up for the year.
The hedge fund bright spots were the market directional, distressed restructuring, fixed income credit, and convertible arbitrage style indices. Market neutral and systematic CTA's were the biggest losers for the month. It is notable that even with the S&P 500 being positive for the year the equity hedge, equity market neutral, and fundamental growth categories are still showing the worst performance for the year across hedge fund styles. Market neutral has been especially hurt in 2016 as a combination of sharp market moves with changing correlations have left these traders with drawdowns that have been hard to manage.
The overall picture as we move into May is mixed. While hedge funds may have disappointed for the first four months of the year, there is enough time for performance to move into positive territory. Unfortunately, for hedge funds to perform better may require dislocations in equities and a more challenging environment for fixed income. Hedge funds will generally lag in a market directional (beta-driven) environment.
Facebook Twitter