Hedge fund managers are not always thinking about their investors 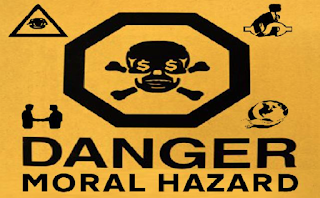 Is there moral hazard with CTA's? That is, do CTA's change their risk behavior to increase their chance of an incentive fee at the expense of investors? If you read the new paper, "Risk-taking behavior of Commodity Trading Advisors" by Li, Jiang and Molyboga, the answer is clearly yes. Investors will bear the consequences of a manager's risk choice, albeit the impact is based on market conditions.
There has been research on this topic with other hedge funds, so the authors focus on the behavior of CTA's. Since incentive fees are a call option on performance, there is an incentive to take on more risk when a fund's performance is out of the money or below the high water mark. This will increase the chance that you will hit the target for incentive fees. Of course, the investor will benefit from the higher performance, but he will have to take-on higher risk that would not occur if the fund was at a different point in the performance cycle.
The authors look at a large set of CTA's over a twenty year period and find some very interesting results. They conclude that risk shifting behavior is less likely for managers who are systematic versus managers who use discretionary decision-making. The system guys do not generally change their behavior to hit incentive fees. They would have to change their models.
The authors also find that behavior is very conditional on the market environment. Studies of mutual funds have suggested a potential moral hazard problem in the second half of the year for managers who have underperformed. This is without incentive fees. For the CTA group, managers will increase risk following poor performance when there are low managerial survivorship concerns. Put simply, if you are manager who is underperforming when the rest of the market is doing well you will take on more risk to hit performance incentives. If all managers are doing poorly so there is strong managerial survivorship concerns, a manager will not take on extra risk to hit incentives. When everyone is doing poorly, you just try and protect the firm. Relative performance or a manager's view on survivorship matters with respect to their risk-taking.
Generally, investors have to understand that manager respond to incentives and want to maximize their revenue. They will adjust their behavior to hit their incentives though taking on more risk regardless of what they say in their marketing material. Watch managers closely, there is moral hazard.
Facebook Twitter