na_z
Jumat, 15 Januari 2016
Facebook Twitter
Loading...
Loading...
The capital flows out of China continue. It is like a financial diaspora of wealth moving to new parts of the globe in search of safety that was not expected just two years ago. The number are big and have an impact on the rest of the world. The real estate gains in some the leading cities around the world are driven by Chinese investors. Now, it makes sense to diversify out side a home country, but let's remember that China has been one of the fastest growing area in the world. The opportunities in China are still vast. 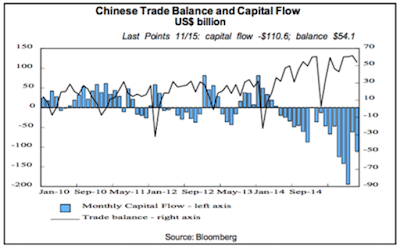 There is more going on than diversification; however, the explanation is rather simple. All things equal, wealth hates uncertainty. It can hedge volatility, but hates uncertainty. In particular, wealth hates anything that changes the rules of the game because then you cannot make the appropriate long-term inter-generational planning that can sustain past successes. Everyone can endure some uncertainty, but when uncertainty affects your ability to liquefy assets, you move the money. If you cannot move it offshore, you take the money out of risky assets and into what you may consider safe. Bank deposits have surged in China during the second half of 2015.
This aversion to uncertainty or ambiguity is not a unique China problem, but policy uncertainty is critically high as evidenced by the rule changes so far this year. The economic policy uncertainty (EPU) gives a clear picture that 2015 saw significant uncertainty. This uncertainty declined in the last quarter and stocks gained. With the uncertainty this year, stocks fell. Capital outflows increased in the summer and slowed when the uncertainty index fell. China financial diaspora whereby wealth is moving to new havens around the world where uncertainty is more controlled will continue as long as  the rules of game are not clear. Talent will also move with this money. The choice is either better rules or more controls.
The China uncertainty effect is spilling over to financial assets around the world. If the technocrats of China do not have control of their financial system, how can other places cope? There is no exogenous business cycle risk that can easily explain the current sell-off. This is the policy uncertainty bear market.
Facebook Twitter