The big market divergences of 2015 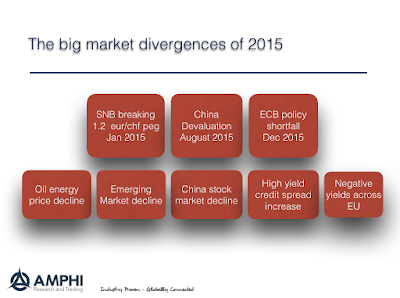 The framework of convergence and divergence is useful to describe markets and hedge fund styles. With this framework, we can focus on the big events of 2015 as market divergences. There were by my count eight unexpected market moves that were mean-fleeing. All were surprises that caused major market dislocations. These events were the biggest opportunities and risks for the year.
There were three key global macro shocks that had an immediate impact on markets. All were surprises in government policies. The year started out with the Swiss National Bank ending its euro/chf peg. This single event led to the failure of a number of hedge funds and hurt many trend-followers in January. The China devaluation in August was another currency surprise that was one of the reasons for the August market sell-off. China risks were much greater than anticipated. The third policy shock was the limited ECB monetary action in December. The market was caught surprised by a less aggressive policy announcement from ECB president Draghi.
There were five big market divergences that developed through the year. Four of the five were associated with price declines. The oil market declined by approximately 40% in 2015 with additional broad declines in natural gas, coal, heating oil, and gasoline. The MLP market was a significant loser because of the energy price declines. The continued sell-off in commodity markets and slowdown in EM growth rates spilled-over to further declines in emerging market bond and stock markets. The China stock market saw crash declines that were only arrested though significant government intervention. The credit markets turned down with signifiant gains in high yield spreads. The only real surprise price gains was in the EU bond markets. 40% of EU sovereign debt is now paying negative interest rates.
Generally, it is harder for investors to profit from price declines, so long-only buyers were hurt by all of these negative divergences. Surprises and divergences were not centered on the upside leading to a poor return year for most investors.
Facebook Twitter