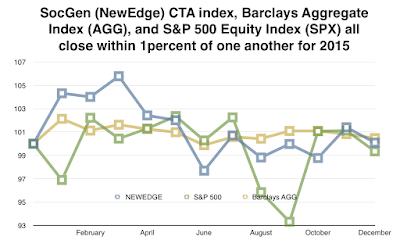 Effort and results were not linked for managed futures managers in 2015.  For all of the trends, opportunities, and trading, the SOCGEN CTA index ended the year up 10 bps. Going to sleep for the year with money in a mattress would have gotten the same return. Nevertheless, equities as measured by the S&P 500 stock index (SPX) fell less than one percent while bonds as measured by the Barclay Aggregate Index (AGG) gained just less than 50 bps. It was a sideways year in spite of the historic change in Fed behavior,  significant oil shocks, and negative interest rates in the EU.
A closer look at the monthly returns show an interesting story for how and when managed futures managers made profits and lost money. Of course, we are generalizing, but we believe a simple comparison with traditional assets can tell an effective story.
Looking at equities, there were two big positive return months, February and October. During these months, managed futures posted loses. The power of diversification hurt the CTA's holding diversified portfolios. In the down equity months, CTA's performed better albeit not always with positive gains. 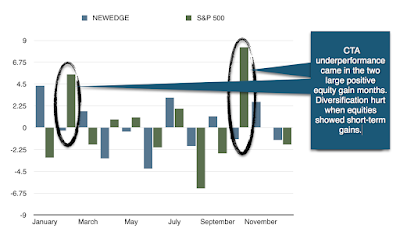 Relative to bonds returns, the managers in the CTA index were caught wrong-footed in two months, April and June. Both of these months were periods when expectations of a Fed increase were not realized. The FOMC meeting results between March and July disappointed the markets. Investors in the first half of the year fully expected a Fed rate increase, but the slow GDP growth numbers from the harsh winter changed Fed plans and caught many traders by surprise. 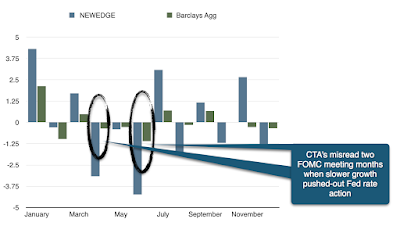 In this context, CTA returns were flat for the simple reason they were too diversified at the wrong times and missed some key market moves in the second quarter. The second quarter loses gave back the early gains during the first quarter. The rest of the year was a push with good months followed by profit give-backs. While managed futures strategies are considered long volatility, there needs to be sustained divergences for longer-term gains. This is why we classify managed futures as a divergent strategy and not just a long volatility strategy. Volatility is necessary but not sufficient for a good CTA return year.
Facebook Twitter