Home/ themes/Global themes on one page for January 2016

Global themes on one page for January 2016 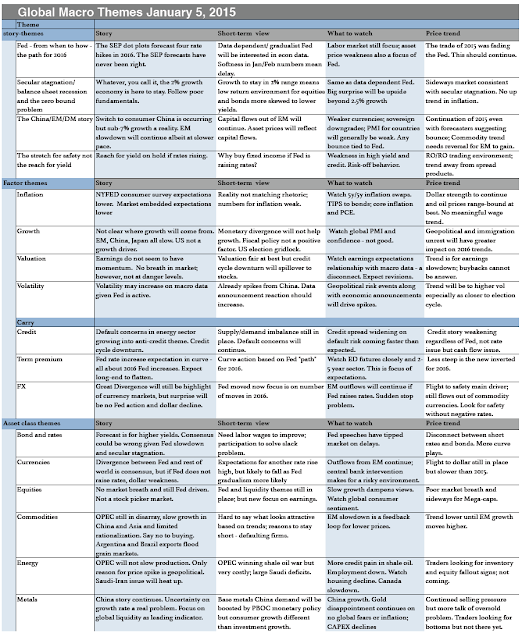 The main theme last month was whether the Fed was going to raise rates. It did the job. It also presented the SEP "dot plots" for the new year which suggested that four Fed increases would occur in 2016. The story is not switched to not when will the Fed start normalization but how will it occur. The "data dependent" Fed focus will mean a higher sensitivity to economic data and higher market volatility.
Larry Summers began the year with a strong editorial on secular stagnation. The slow growth in the US and the rest of the world should cause all investors to take a closer look at his arguments. A world of global secular stagnation is very real.
If rates are going to move higher, then the reach for yield may be over. It is more likely investors will be stretching for safety. We are more likely to be in a RO/RO environment like the period between QE's. A world without QE is not the same as a world with it.
I hate to be a pessimist but fading consensus and being more negative may be the right play for 2016.
Facebook Twitter