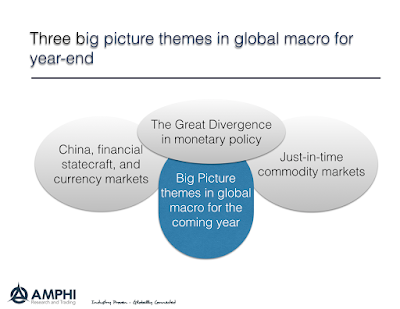 Perhaps the Great Divergence in monetary policy between the Fed and ECB is not a great as expected given the weaker than expected policy change by the ECB, yet 2016 will continue to be the story between the Fed raising rates and the ECB pushing interest rates further into negative territory. Right before the ECB announcements the interest rate differential between Germany and the US was at the widest level since the introduction of the Euro.

Yields in the EU jumped up and the Euro had one of the biggest positive days since its inception on the announcement only to see ECB president Draghi suggest that there is "no limit" to what the ECB will do to help the economy. The high volume of activity coupled with the price moves tells us that that many are trading this differential closely. Some of the most liquid markets in the world may still face cascades when these crowded trades are surprised.
Assume that the Fed raises rates in December,  the focus for most of 2016 will be with the path for futures rate changes. Similarly, the EU focus will be on the success of ECB's QE program. We have moved from the Fed's QE of yesterday to the ECB's QE of tomorrow.

Getting this trade right is a global macro requirement for 2016.
China, financial statecraft, and currency markets

The currency markets will have to assess the Chinese coming out party from its inclusion in SDR basket. SDR's are a unit of account that have not taken the global markets by storm, but this places the Renminbi into the Big Three of currencies -The dollar, Euro, and Yuan. There will be more focus on what the Chinese currency will be doing, what the PBOC is doing, and the role of China in international lending. This is why we placed the words financial statecraft in the title of this section.

Currency traders will have to have an opinion on China - from growth, to PBOC policy, to currency moves. If you are involved with currencies, you will not be bale to avoid having a China opinion if you do not trade the currency. Don't worry, that effort will not be useless. Most currency traders will be trading Renminbi soon enough.
Just-in-time commodity markets

The commodity markets continue to go down in response to the declining growth in China and the rest of the world. The super-cycle talk is long over, and we are in different commodity world. There has always been the view that supply and demand for commodities have been relatively inelastic both in the up and down direction.

The surprise over the last few years, especially for the energy markets, is that private market supply is more sensitive to price than what we may have thought. This is especially the case with bringing on new production. We have also found that supply that is not sensitive to market prices because marginal costs are low will destroy the rest of the market. Economics 101 told us that, but the markets have been surprised by how quickly producers can reduce their marginal costs over the last few years.  In the case of low cost non-private producers in Middle East, low costs have made them willing to ride the price declines with production increases.

The shale oil boom has been about how oil men were able to take bank financing, punch holes in the ground and get oil and natural gas on-stream quickly. The decline in price is about the battle of those who can generate supply quickly against those who want market share and don't care about price in the short-run, the Saudi Arabia. OPEC is broken because no one can impose discipline on producers.

For the rest of the commodity markets, traders have been surprised how quickly producers can adapt to changing market conditions. We have also seen the elimination of crop seasons. Corn and soybeans are both Northern and Southern hemisphere crops. Coffee is grown around the world. Sugar comes varied sources. Wheat production is grown in various crop centers. The high dollar has made it possible for other countries to sustain production. Technology and storage innovation have allowed producers to continue to generate new supply in the face of falling prices. What we have seen in manufacturing we are now seeing in commodities, an adaptable just-in-time production world.

Be ready for surprises from adaptation in a low commodity price environment.