Managed futures moving into positive territory - some have been finding trends 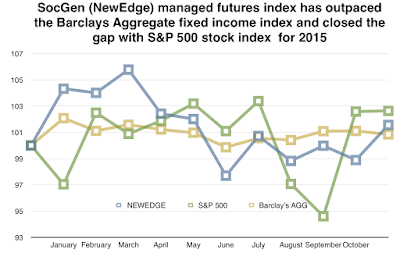 The SocGen CTA index gained 2.7% for the month of November placing the returns for the managed futures index in positive territory for the first time since May. The CTA index is now above the Barclays Aggregate bond index and only slightly below the returns for the S&P 500 stock index.
The good returns were caused by getting the direction of the main market exposure correct because the size of the market moves were quite modest. Stocks around the global ended the months in a tight range. Bonds gained for the second half of the bond but generally yield curves flattened on rising short rates under the expectation that the Fed will raise rates in December. Metals, energies and agricultures were all generally down for the month with declines of over 4 percent in the energy complex. Currencies continued to follow trends based on the expectation that the dollar will still strengthen in response to Fed action.
It was noticeable that the most liquid markets had some of the largest moves so those funds that focused their trades in energy, currencies and bonds were able to generate good returns. A decline in volatility also helped managers with signal generation and position sizing. Generally, we find managers do well in lower volatility shallow trend environments where price signal to noise ratios are more well-pronounced.
There has been some grumbling by investors about managed futures performance this year, but the index suggest that returns, albeit modest, may prove to be acceptable relative to traditional assets.
Facebook Twitter