Home/ monetary policy/Fed forecasts - Do you believe in a Goldilocks economy?

Fed forecasts - Do you believe in a Goldilocks economy? 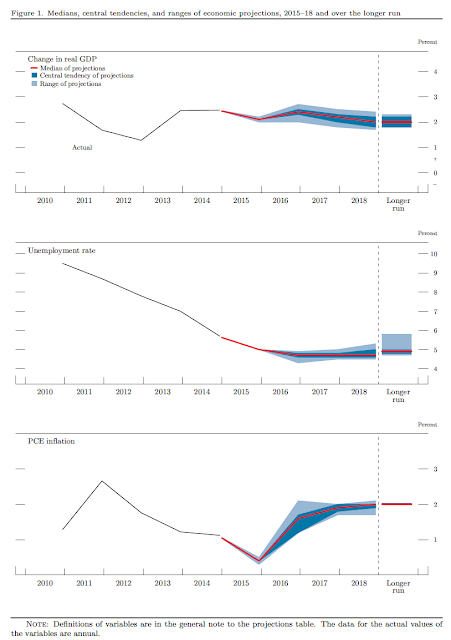 Looking at the projections of the Fed for 2016 and beyond can provide a starting point for private projections with the "big three" forecasts of growth, unemployment, and inflation. Should it not surprise us that the Fed believes all three are going to be exactly where they should be for the coming two to three years? Of course, they have to believe their generated forecasts or they would not have raised rates.
In spite of starting to raise rates and forecasting four rate increases for 2016 as measured by the SEP, the Fed thinks growth will be stronger and be above 2% for the year. Unemployment will continue to decline and stay below 5% for the the long-run. Inflation will surge in 2016 and hit the 2% target by 2018. Investors have to ask three questions.
My guess is that you don't believe these three are possible. In fact, I would argue that at least 2 of the 3 will be outside their shaded range and that the Fed forecasts will be out the window by this summer.  The question is what is the market discounting and whether there is much value with following the Fed forecasts. I think any investor should follow the Fed forecasts at their own peril.
Facebook Twitter