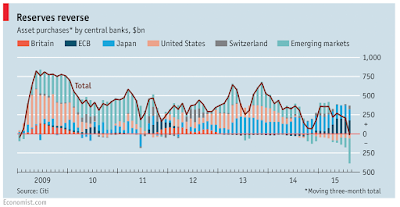 One of the key themes in 2015 has been the decline in the foreign reserve stockpile by EM central banks. EM central banks have been selling to help support their currencies from a free fall that will lead to private capital outflows. These banks added to reserves to stop exchange rates from rising in the period from Asian crisis until this year. They are now engaged in what some are calling "quantitative tightening". There have been good arguments that suggest that there is no quantitative tightening effect in the sense of being the opposite of QE, but there will be spill-over with global credit.
With the Fed deciding to raise rates perhaps at the December meeting, monetary liquidity will be the  key issue in 2016. The ECB is likely at their next meeting to flood more money in the system. So we will have EM central bank foreign reserve effects which will spill-over to EM domestic markets and DM QE and rate effects which will also spill-over to global credit and exchange markets. We expect that the Fed and ECB will still be the dominant driver for rates but the quantitative tightening will force EM central banks to sterilize for their domestic markets. This is a dangerous game of trying to control capital flows, domestic rates, and exchange rates. Failure will lead to capital control in an effort to just stop money flows.
Facebook Twitter