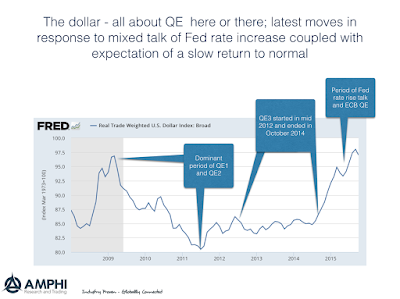 December will set the tone for the direction of the dollar in 2016. The ECB will meet this week and there is a high likelihood that it will increase the scope of their QE program. They are preaching the QE religion like a camp revival although there are some side comments of doubt whether monetary policy alone will be enough to help the economy. The Fed will then have its FOMC meeting which will likely announce an increase in the Fed funds rate. Any uncertainty will be with the language used and the expectations of further increases in 2016.
The differentials between longer rates between the EU and the US are at the highest levels since the introduction of the Euro. Clearly, there is little to stop the dollar from going higher especially with European rates negative for maturities out a few years. There is no reason to hold a Euro fixed income asset. We further expect that the BOJ will have to rethink their policies given Japan is back in a recession. The PBOC has been loosening rates and reserve requirements which should push more capital into the dollar.
Predictions are always upended by surprises, but the current evidence should tell any investor not to fight the dollar rise.
Facebook Twitter